1784- Discovery Island is explored by the royal exploring ship the HMS Discovery under the command of Captain Vancouver.

September 7, 1858- American paddle steamer Sea Bird  sailing out of  caught fire shortly after leaving  and to save the lives of the people on board it was run aground on what is now named Sea Bird Point. the 450 ton Sea Bird register to Captain Conner. sailed from San Francisco March 18, 1858 and was a first steamer or to go up the Fraser River but it unfortunately ran aground on a sandbar and was not floated for four months.

1862- The island is used by the Lekwungen to escape the smallpox epidemic that had already killed many.

1886- The island's first lighthouse is built at Sea Bird Point/Pandora Hill. The government appointed an older man Richard Brinn to be the first lighthouse keeper. His daughter Mary Ann Croft assisted him. In fact she ended up doing most of the work. She was a widow with two children. 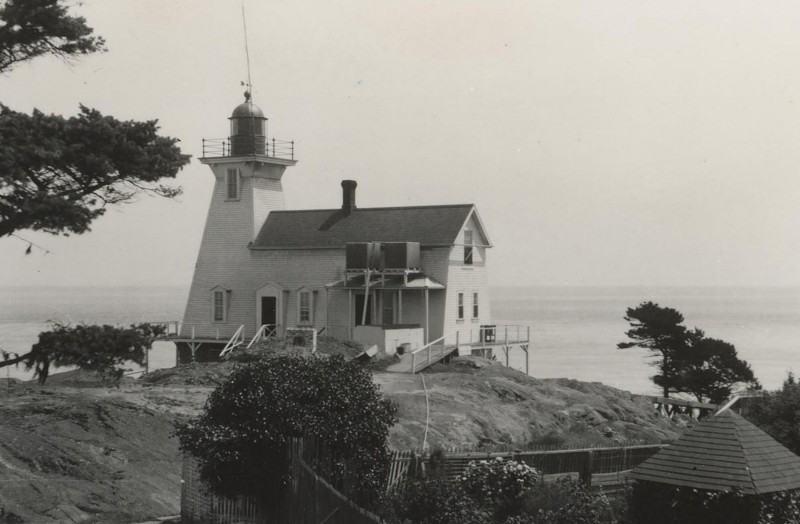 April 9 1902- Mary Ann Croft after her father dies is appointed the lighthouse keeper. She was the first female lighthouse keeper in . She earned only $900 while others with foghorn alarm stations receive $1200.

1912- Warburton Pike acquired 160 acres of the island; had a house built on the island in 1913(rumored to be designed by architect francis rattenbury); had a 28-foot Clumbia River boat with a 5hp engine.

1918- "Captain" Ernest Godfrey Beaumont acquired Warburton Pike's property. Beaumont and his wife live in Pike's old house near the centre of the island it was later updated by Samuel Maclure. He had a 40 foot yacht named the Dscovery Isle which he had had built in Hong Kong in 1930 which he would use to go to and from the island. Beaumont used to say "I know where all the rocks are. I bumped into all of them and once in a while I bump into them again to remind myself of their presence"

1932- Mary Ann Croft retired at 67 as the lighthouse keeper after 46 years at the lighthouse and moves to . With a Pension of $43 a month. (Although rumor has it in the 1920s she saved for retirement by helping rum runners relay messages to each other, the police gave her the name "Queen of the rum runners" Discovery was the most popular island with rum runners during prohibition) She received the Imperial Service Medal from the Lieutenant-Governor in 1934.

1933- On the waters off Discovery there have been many claims of a sea monster known as a "Cadborosaurus(Cadborosaurus willsi)(Caddy)" known to be a extremely fast, greenish brown, long(about 30 feet), serpent like creature. There are accounts from First Nations stories dating back generations of a sea monster like creature of a similar nature to the Cadborosaurus, and frequent sightings right up to modern-day. But the Cadborosaurus most notably caught the public's attention in 1933 when W.H. Langley clerk of the Provincial Legislature and F.W. Kemp employee of the Provincial Archives in addition to their families were in a sailboat just off "the point of Discovery Island" when they spotted the creature.

Broadcast Date: July 29, 1956. A woman describes seeing the Cadborosaurus in the waters off of Discovery Island. video by: CBC  Play video

September 1939- WW2 signal station is built on the highest point of pandora hill the 8.41 acre property was bought from Captain E.G. for $700, with the promise that he would have the first chance to purchase back the property if the military decided to put it up for sale.

July 3, 1945- After the war the WW2 signal station on the island is shutdown and the property and the buildings are sold back to Captain E.G. Beaumont.

July 1951 - Captain Beaumont christened the Dscovery Isle II built at Nicholson boatyards, and was later donated in his will to the Royal Victoria yacht club where it was used as a club vessel for many years.

1967- Captain Beaumont dies at the age of 92 he had lived on the island for 50 years, Beaumont was always hosting Scouts, Cadets and all kinds of youth on the island. He claimed to have hosted 20,000 over his lifetime on the island. He kept fit into his 90s and used to row around Discovery and the Chatham Islands as well as to the Victoria Yacht Club. In his will he gave the island to the Province of British Columbia. There are two plaques on the island one from the Scouts and one from the Province of British Columbia thanking him for the gift. They are located on the west side of Rudlin Bay.

1978- The new tower and some of the adjacent buildings are built.

January 1996- The Discovery Island lighthouse is de-staffed and automated, the lighthouse had been manned for 110 years. September 3, 2004- The foghorn at the Discovery Island lighthouse is deactivated and removed from the station.

May 2012 - Present- Lone wolf takes up residence on Discovery Island.